October 29th in history marks the final stage of the 1971 grand opening events for Walt Disney World. The three-day celebration was filmed and shared with the television world on this date and dreams are still coming true after 44 years. 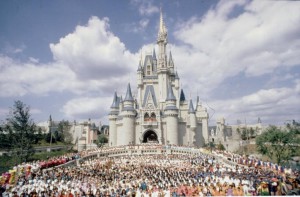 The next day marked the official grand opening of the two resorts – Disney’s Contemporary and Polynesian Village Resorts. The Electrical Water Pageant and Fantasy in the Sky Spectacular debuted that evening.

After seven years of planning, the 107 acre Orlando’s Magic Kingdom opened its doors in a soft opening October 1, 1971. There were 5,500 Cast Members greeting the 10,000 guests who made opening day. Because of the chaotic grand opening day of Disneyland, planners strategically spread the opening over the entire month of October. In this way, any problems could be fixed before the larger crowds came in for the official dedication ceremony October 25th.

The Magic Kingdom began with 10,000 guests the first of the month and by month end had greeted around 400,000 visitors.

Millions of people over the past 44 years have been able to enjoy awe-inspiring magic in a kingdom where dreams come true. Walt would be proud!