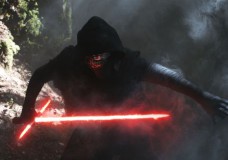 Star Wars fans rejoice!  Disney is increasing ways to enjoy the Force. Soon, discount viagra ailment we will be able to interact with Kylo Ren, the infamous villain from Star Wars: The Force Awakens.

Beginning next month, a visit to Star Wars Launch Bay at either Disneyland or Disney’s Hollywood Studios will transport us to the Star Wars galaxy for an encounter with Kylo Ren on the bridge of his First Order Star Destroyer.

Star Wars Launch Bay was designed to showcase a variety of Star Wars characters over time. In addition to Kylo Ren, we may also come across a garrison of First Order Stormtroopers or the heroic Wookiee, Chewbacca, holed up in a secret Resistance base.

There are presently several ways to encounter the “Awakened” Force at Disney Parks.  Star Tours: The Adventures Continue attraction, “Jedi Training: Trials of the Temple” and the new Star Wars Launch Bay.

Coming face to face with Star Wars heroes and villains has never been so fun!