Disney recently announced two new lands being added to the Hollywood Studios – Star Wars Land and Toy Story Land.  It’s the Studios turn to get a major revitalization and enlargement. 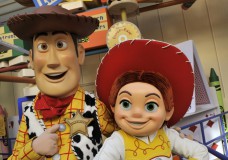 The Toy Story movies and characters will come to life in the new 11 acre addition. Guests will be transported into the adventurous outdoors of Andy’s backyard. Similar to Honey I Shrunk The Kids, cialis guests will think they’ve been shrunk to the size of Woody and Buzz as they are surrounded by oversized toys that Andy has assembled using his vivid imagination.

There will be two new attractions in the Land including a thrilling toy-filled roller coaster adventure on the back of Slinky Dog. The other attraction involves the famous little green aliens from the movie who will take guests around for a spin in their very own flying saucers.

Toy Story Mania! has not been forgotten. This favorite attraction where guests take aim at 3D objects will be expanded with more midway track that takes you into the world under Andy’s bed where he’s built a carnival-style midway.