We have another Disney anniversary approaching on May 1st– The Disney-MGM Studios opening day 1989.  It was the largest opening day press event in Disney World history. The Studios (now called Disney’s Hollywood Studios) was the third Walt Disney World theme park and its opening was highly anticipated.  So much so, that on opening day the parking lot was closed after only an hour for a capacity crowd.

“The world you have entered was created by the Walt Disney Co. and is dedicated to 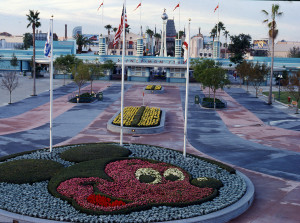 Hollywood – not a place on a map but a state of mind that exists wherever people dream and wonder and imagine– a place where illusion and reality are fused by technological magic.  We welcome you to a Hollywood that never was – and always will be.”—Michael Eisner, May 1, 1989 – opening day dedication of Disney-MGM Studios.

When Disney-MGM opened, it represented the glamour and glitz of Hollywood in its heyday during the 1930’s and 40’s. Among the first legends who visited the park were George Burns and Bob Hope, who helped cut the filmstrip ribbon dedicating the Studios.  There was also a televised extravaganza filled with stars to celebrate. (You can see the televised opening below thanks to Disney Parks).

In its original concept, Disney-MGM Studios took you behind the scenes, literally, to see how television and movies were made.  The movies included live action and animation.  It was a real working studio.

In the Magic of Disney Animation Tour you could watch real Disney animators at work. On the Backstage Studio Tour, if they were filming on the day of your visit, you could watch them in production. The first feature-length movies filmed at the Studios were Ernest Saves Christmas and Newsies.

My daughter and I were there for the event.  Shortly after the opening, I began working at the Studios at Superstar Television, Indiana Jones and Monster Sound Show.  Each day there would be a star of the day come to the Studios.  I got to see many, many stars.  I was even lucky enough to be an escort for Ginger Rogers!

Stars would come to the Studios as part of the “Star Today” event that took place in front of the Chinese Theater.  After traveling in a mini parade down Hollywood Blvd. sitting on the back of a 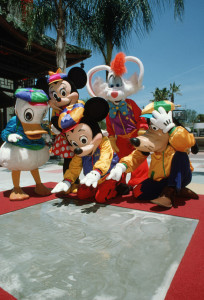 convertible with Mickey Mouse, the star would have a ceremony putting their handprints and signature in cement.  Just like Grauman’s Chinese Theater in Hollywood, the star’s “block” would be placed in the Couryard.  All the blocks you see today in the Chinese Theater courtyard were added one at a time as each star visited the Studios.

In comparison to the other parks, the Studios was quite small.  It was not a “full day” park.  It consisted of four themed areas – Hollywood Blvd., Echo Lake, Streets of America, and Animation Courtyard.  (Sunset Blvd. and Pixar Place were added later.)

This is just Part 1 of the articles looking back at the opening of Disney-MGM Studios.  I’ll be posting more as we get closer to the anniversary.  Following is the televised Grand Opening.  Enjoy!