One of the best parts of “living at Disney” is that you can stop in often, viagra look take your time and have the opportunity to see everything on property. My personal favorite thing to do is visit the different resorts to see all the creative ways the imagineers use to bring a theme to life. The best example of this is at Disney’s Art of Animation Resort. 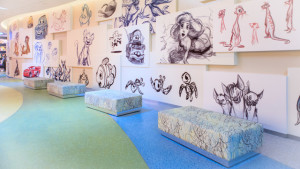 The resort is themed after four well-known Disney-Pixar movies — Finding Nemo, Little Mermaid, Lion King, and Cars.  There’s no way to visit this resort without smiling.

When you enter the lobby, you’re greeted with larger-than-life animation from these movies.  But one of the main attractions (that unfortunately, a lot of people miss) is the giant Storyboard Chandelier.  Over the years, artists, filmmakers and actors have stopped by to autograph panels that are attached to the chandelier.

There are several other little-known secrets at this resort.  Take a look as John from Disney shows us a few.

(For more information about the resort, go to https://disneyworld.disney.go.com/resorts/art-of-animation-resort)