Disney Hollywood Studios is celebrating it’s opening day on May 1st.  To celebrate, I thought it would be fun to take a look at 1989 Disney-MGM Studios as it was called then.

In its original concept, the 1989 Disney-MGM Studios was a real working studio where you could see how television, movies and animation were done…for real.  This is Part II of our visit to the original 1989 Park.  You can read about the opening day festivities in my

Part I post, Disney-MGM Studios Opening Day 1989.  I was there opening day and later became a Cast Member at the Studios.  In Part III, I’ll take you behind the scenes of some of the attractions.

Standing tall and proud for 26 years, the Earffel Tower served as the Studios Icon.  While the Earffel Tower was not used to hold water, it was inspired by the working water tower in Burbank, Calif. landmark at the Disney Studios since 1939.  Unfortunately, it was taken down in 2015 to make room for Studios expansion.

In 1989, the entrance gates were very similar as now with the exception of the new scanning system that replaced turnstiles. However, there is a HUGE difference in ticket prices — you would be paying $29 for an adult one-day ticket to enter.  (They increased ticket prices $1 on opening day 1989.)  Sigh…oh, the good ole days!!! 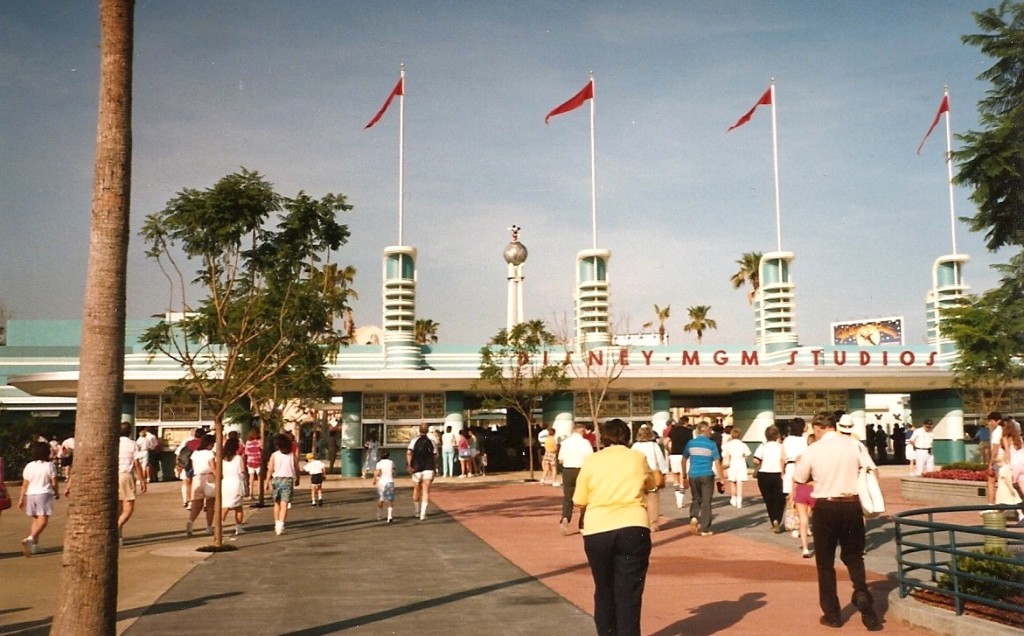 As you walk down Hollywood Boulevard passing by the stores you won’t find Sunset Boulevard on your right or Tower of Terror.  In fact, if I remember correctly, that was the cast member entrance area from the parking lot when I worked there.

You can get a better idea of the layout of that time by looking at the 1989 aerial view below.  Hey, can you see the giant hidden Mickey?  (Hint:  The Chinese Theater at the bottom of the photo is the middle of his smile.) 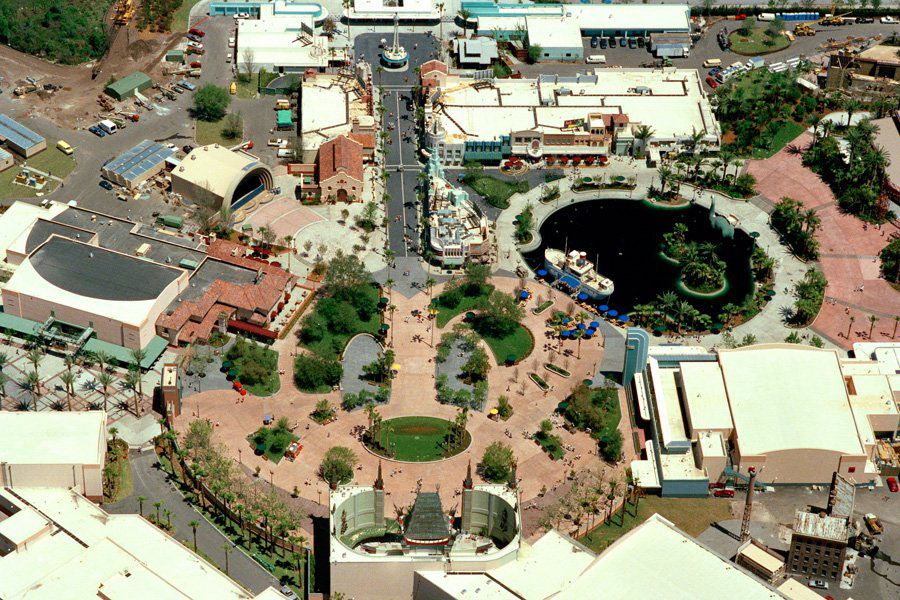 As you continue your stroll down Hollywood Boulevard, you’ll come upon the stage show area called Theater of the Stars.  Live shows like “Hollywood, Hollywood” were featured throughout the day.  Theater of the Stars offered the perfect vehicle to showcase live glitz and glamour to further enhance the theme of the Studios. Later the stage area would come down to make room for the addition of Sunset Boulevard and Tower of Terror, the present day look. 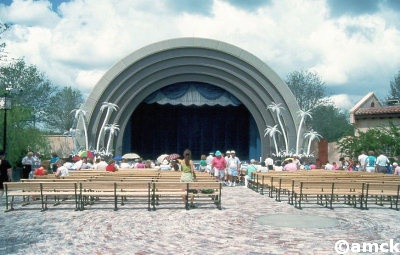 Right next door to Theater of the Stars was the Hollywood Brown Derby, the restaurant pattered after the famous Hollywood, California Brown Derby.  I’m glad to say it’s still a part of the Studios today. 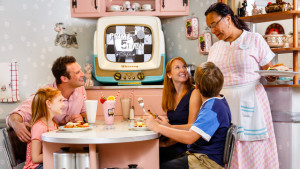 Other opening day restaurants included (my personal favorite) the 50’s Prime Time Café. Not only did it have the perfect retro furniture, it included old black and white TV’s at every table area. Excerpts of 1950’s TV shows would play throughout your meal.   Since I grew up in that era, I’m letting you know that it’s all authentic! Thank goodness it’s still there.  If you haven’t been to the restaurant, make sure you do.  I think it’s the best atmosphere, food and entertainment anywhere!

The other table service restaurants were Hollywood & Vine, the art deco-designed restaurant located in Echo Lake area; and Soundstage Restaurant, located in Soundstage 5.

Positioned at the end of Hollywood Boulevard was the Chinese Theatre.  It was like a landmark icon for the Park.  The cement blocks with movie star hand prints and signatures you see today, in the courtyard entrance, weren’t there.  They were added one at a time as stars visited the Park for “Star Today.”

The Great Movie Ride, the dark ride paying tribute to classic films, was located inside the Chinese Theater as it is today.  The preshow and inside show were very similar as now except for a few changes made recently to update the movie ride experience. 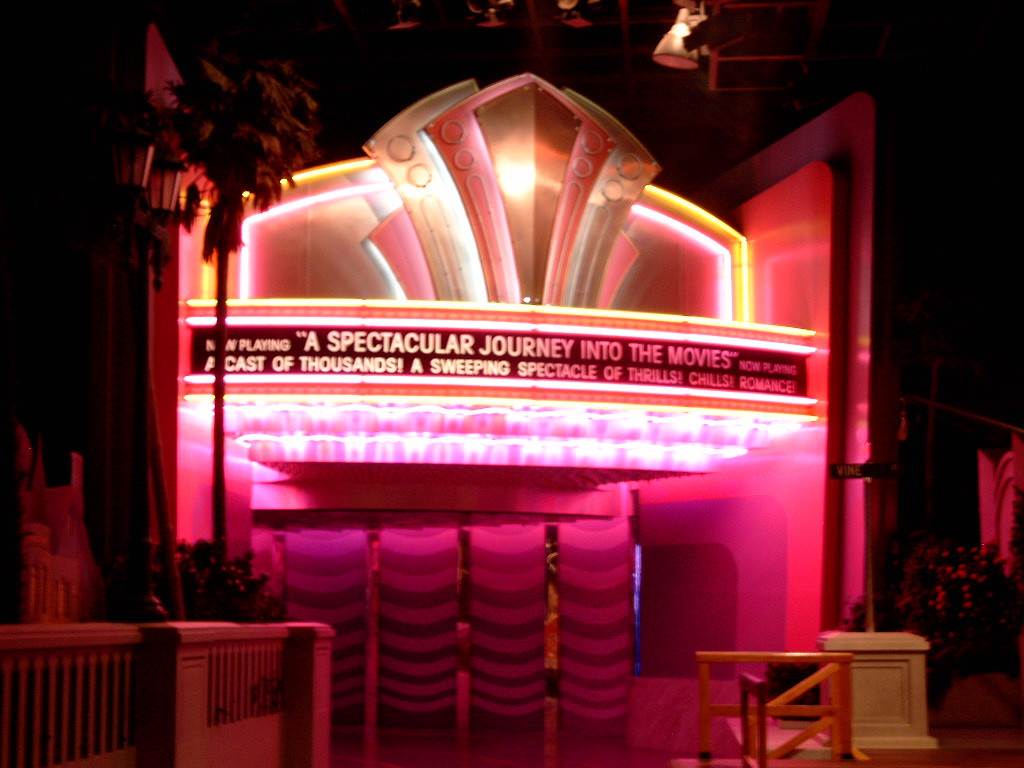