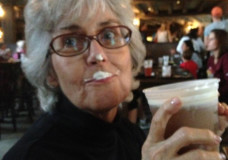 Enjoying Butterbeer at the Three Broomsticks

About the author…F. G. Mama, cialis buy Katie McDill, has been in love with Disney World since first entering the gates in 1976. A few years later, she moved across the road from Magic Kingdom and began working at the “happiest place on earth.” For several years you could see her dancing on stage and down Main Street USA as Fairy Godmother at Walt Disney World. For the last ten years, she along with daughter and family, have enjoyed “living the dream” in Celebration (the town that Disney built) just across the bridge from Disney World. Her other career included being a writer, artist/designer, special events creator and coordinator. Now she is enjoying the good life of Anna Maria Island, Celebration, Disney World and, of course, sharing magic at FUNaticsTV! 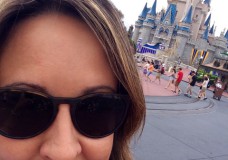 About the author…Sharon Sprague is a former Cast Member and self-proclaimed DSF (Disney Super Fan). Her Disney experience started in the early 90’s as a Ride & Show Attendant at Splash Mountain at the Magic Kingdom. After college, she was Cast as a Senior Copywriter for Group and Convention Marketing at Walt Disney World and has since worked on and off as a freelance Creative Consultant for several teams within the Disney company. Her experience covers stage, advertising, illustrating, theme park entertainment, broadcast and more. Currently, she’s a Senior Creative Writer for Kohler Hospitality and sells her illustrated work on Etsy under the shop name, Ok Silly, Ink. Sharon has a Bachelor’s degree in media studies and has also studied musical theatre performance, cartoon illustration, and comedy writing at the famed institution, The Second City. Sharon currently lives in Milwaukee, Wisconsin with her boyfriend and two dogs – Pepper and Gracie. She visits Walt Disney World frequently and dreams of being cast again at Disney.