Imagine being one of the first kids to enter castle on Disneyland’s opening day.  Robb Fiscle can say he was.

On July 17, viagra usa 1955, the gates opened to an excited crowd of kids waiting to be the very first to enter the first castle in the very first Disney theme park – Disneyland!  As thousands of people grouped outside Sleeping Beauty Castle, a knight on horseback announced “open the Fantasyland Castle in the name of the children of the world!”  The drawbridge came down and a lucky group of kids rushed in. 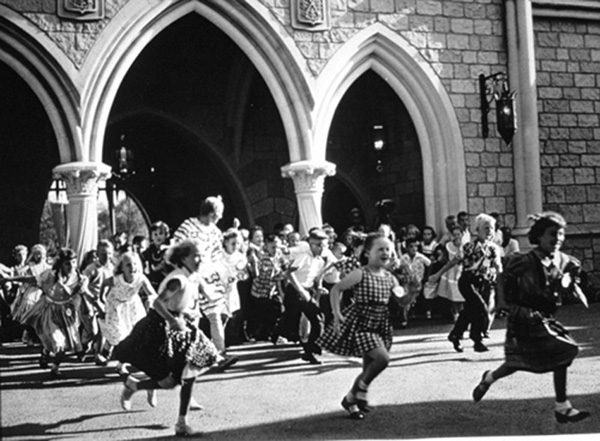 Among those leading the group was Robb Fischle. (He’s the little boy in the checkered shirt in the center of the photo, behind the boy in glasses.)  He tells of how his family would watch “Disneyland” on television every Sunday night to get the latest construction updates.  Also, how they would peek at the actual construction as they drove down Harbor Boulevard.

During Disneyland’s 50th anniversary celebration, an old video was shared of Disneyland’s opening day and Robb telling his story.  Here’s a look back, at a look back to a magical time long, long ago.