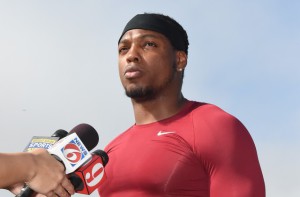 Heisman winner Derrick Henry training at Disney’s Wide World of Sports.  According to Disney Sports News, cialis sales purchase the running back from Alabama and QB Dak Prescott (Miss. State) are among an impressive list of NFL draft prospects training with renowned performance trainer Tom Shaw in preparation for this year’s NFL Combine and NFL Draft.  In addition to the the NFL draft prospects, several MLB and NFL veterans are also training with Shaw, such as  DT Jordan Phillips (Miami Dolphins), OF Carlos Gonzalez (Colorado Rockies) and IF Martin Prado (Miami Marlins).

Henry trained with the group on Tuesday, two days before he said he planned to attend the National Prayer Breakfast on Thursday (Feb. 4th) at the White House that is annually attended by President Barack Obama.

Most of the players are expected to train with Shaw at Disney through the NFL Combine (Feb. 23-29) and the NFL Draft (April 28-30).

Shaw has worked with 145 NFL first-round draft choices, 10 No. 1 picks and 11 Super Bowl MVPs. Prior to establishing his own performance camp at Walt Disney World Resort, he was on the strength and conditioning staffs for Florida State University, the New England Patriots and the New Orleans Saints.