Do you remember where you were and who you were with the first time you saw a Star Wars movie?

I certainly do because it was such a pivoting event for me personally, generic cialis for the movie industry and “the times.” I’m sure most of you were too young or not even born when the first Star Wars episode made the scene in 1977. I, on the other hand, was a mother with two children (8 and 9) in the audience. It was so impactful, there was applause when it ended which was very rare during those days. It made such an impression on us, we stayed and saw it again! Ever since then, we have been “Force FUNatics!” Now, 38 years later, we are three generations strong with the Force and no cure in site.

Being Disney FUNatics as well, we are anxiously awaiting all the new Star Wars additions coming in the near future to the Disney U.S. parks. This resurgence of the craze is from the announcement of a NEW movie — Star Wars: The Force Awakens – debuting December 18th.

If that is not enough big news, Disney officials recently announced a Star Wars-themed land coming to Hollywood Studios in Orlando AND also at Disneyland Park in California. Both will be the largest single-themed land expansion ever (14 acres). Guests will be transported to a never-before-seen planet, a remote trading port and one of the last stops before wild space where Star Wars characters and their stories come to life. 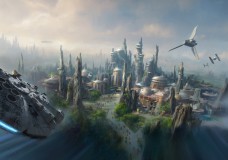 The land will have two signature attractions, including the ability to take the controls of one of the most recognizable ships in the galaxy, the Millennium Falcon, on a customized secret mission, and an epic Star Wars adventure that puts guests in the middle of a climactic battle. I don’t know about you, but I can hardly wait.

Other announcements include a new Star Tours adventure, a Star Wars Launch Bay, a new Jedi Training Academy and a “Season of the Force.” These are scheduled for later this year and early next year. Guests will be part of both new and enhanced experiences at Walt Disney World Resort and Disneyland Resort.

There are many fun things to look forward to for Disney and Star Wars FUNatics! The Force is strong with us!