Disney World Frozen Ever After Opens at Epcot’s Norway Pavilion

Frozen Ever After Opens at Epcot’s Norway Pavilion

The long-anticipated Frozen Ever After adventure at Epcot’s Norway just opened. It’s one of several new shows and attractions opening this month at all four parks at Walt Disney World.  Summer vacation season is officially here!  The ride replaces the 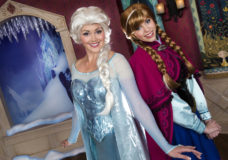 former Maelstrom attraction at the Pavilion.

The storyline picks up after the events in the movie “Frozen’ and celebrates a “Summer Snow Day.”  A stone archway entrance greets guests to the kingdom of Arendelle. Queen Elsa, best viagra Princess Anna, Kristoff, Olaf, trolls and Marshmallow join them on their boat journey through the frozen willow forest, past Troll Valley and up to the North Mountain to Elsa’s ice palace.

Frozen Ever After is getting rave reviews, especially the greatly improved animatronics.  Pay a visit to Arendelle yourself in the following full ride through video by  InsideTheMagic.net.  (Spoiler Alert! in case you wish to see it first in person.)