Movies Going “Through the Looking Glass” with Johnny Depp

Going “Through the Looking Glass” with Johnny Depp

I’m ready to go “Through the Looking Glass” with Alice and Johnny Depp!  How about you?  The hype is on and I’m loving it!  The movie’s May 27th debut can’t come fast enough.  The Mad Hatter, Depp, and director James Bobin recently had a Q&A with fans via the movie’s official Facebook page.  Since I’m 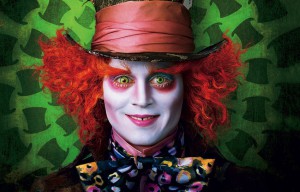 such a huge Depp fan, I zeroed in on his answers to the wide range of questions.

I particularly liked his response to – if he were any kind of sandwich, what would it be.  Depp replied, since I was “born and raised in Kentucky…I’d be a bologna sandwich.”

In a more serious question to what moments he lives for in movies.  Depp replied, “My favorite moment in any film is when the bottom drops out, when there’s confusion, when there’s the opportunity for chance, which is far more interesting than just reading your lines.”

Another question prompted Depp to talk about how his dreams inform his character choices.  He told how he’s had dreams about a majority of his roles.  How things pop up in his dreams that he’s applied to the characters.  If his dreams inspired him in his role as Mad Hatter, it worked.  (You can check out the full interview at Facebook.com/DisneyAlice/videos.)

This time, “Through the Looking Glass” will take Alice (Mia Wasikowska) into the underworld.  When she makes it through the looking glass she meets the Blue Caterpillar who tells her she has to embark on a quest to save her “truest friend,” the Mad Hatter, in a race against Time (Sacha Baron Cohen).

Oh yes, here’s a little warning from Johnny — “If you don’t watch it, I will be outside your house in a tree, and I will scare you.”

Until May 27, here’s a treat — the newest “Alice Through the Looking Glass” trailer.