For years I heard about the “underground city” beneath the Magic Kingdom. That’s the way all the deliveries, employees going to work, etc. seemed to magically appear. Since hearing of the Magic Kingdom utilidors, I HAD to see them and learn more about the system.

A few years later, as a Disney Cast Member at Magic Kingdom, I took my 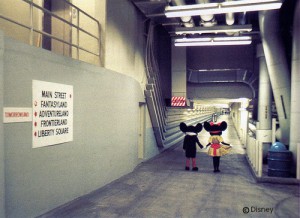 first bus ride to the entrance to the tunnels. My heart was skipping beats, a tear formed in my eye and a big smile came across my face.  As I walked into the huge entrance I couldn’t help thinking … “Dreams do come true.”

If you have a similar dream, you don’t have to go to such extremes as I did in order to see the “Utilidor” tunnels beneath Magic 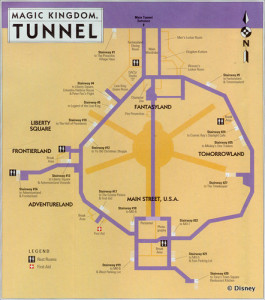 Kingdom. You can be escorted into the tunnels as part of the Backstage Magic Tour (a VIP Experience offered at Disney World). Not only do you get to view the Magic Kingdom Utilidors, you get to go behind the scenes at the other Disney parks as well.

You’ll learn the inner workings of The American Adventure at Epcot; The Twilight Zone Tower of Terror at Disney’s Hollywood Studios; and Wild Africa Trek at Animal Kingdom. All of this and more in a day of discovery at Disney World. Oh my!