Walt Disney’s office on the Walt Disney Studios lot in Burbank has been carefully restored.  Office 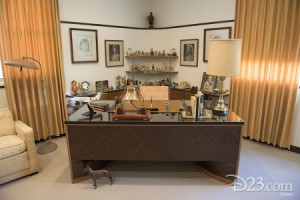 suite 3H is now open to Disney employees, buy cialis cast members and studio visitors.  I’m so excited to see that something of Walt’s has not only been preserved, viagra sales but also faithfully restored by the Disney Archives staff.

Imagine walking into Walt Disney’s office and standing among the original furnishings as he did. His desk is all set to work and his shelves are filled with his collection of miniatures and awards. On the other side of the office sits his piano. I can just picture the Sherman brothers and Walt around the piano creating the next award-winning musical score. (Robert and Richard Sherman are responsible for the vast majority of Disney movie scores and numerous songs throughout the Disney Parks attractions.) family photos and even the bronze booties bookends on his desk. He really was a strong family man. It’s a reminder of why he created Disneyland – a place the entire family could enjoy and play together. “We put this permanent exhibit together to serve as a source of inspiration,” said CEO Bob Iger during the dedication ceremony, “a reminder to have great ambition, to take bold creative risks, to constantly innovate and push the limits of possibility, to relentlessly pursue perfection, and to tell fantastic stories that touch peoples’ hearts. That was Walt Disney.”  (photos from D23.com)