Beginning in October 1989, a new little character called “Buzzy” stole your heart and earned your sympathies in the Cranium Command show.  It was located in The Wonders of Life pavilion in Walt Disney World’s Epcot.  For me (and my family) it was the most comical, entertaining and informative attraction ever!

In most pre-show areas, people will talk and not pay attention.  However, in the Cranium Command pre-show you stopped talking, stood up straight and paid attention!  This is why …

(speaking in a loud commanding voice) “All right, you pitiful, soft-bellied sad sacks; eyes front and listen up! I’m your commanding officer, General Knowledge. And it’s my job to turn you mealy-mouthed meatheads into a crack squadron of Cranium Commandos. Your job—if you can cut it—will be to run the most sophisticated information system ever devised, the human brain. You! There in the back! Suck in that gut and wipe that smile off your face! The brain is serious business. Now, listen up, you miserable toads! This is your brain. You will eat with it; sleep with it; you will never leave it! Without you, the brain is nothing. Without your brain, you are nothing! It took three million years of research and development to make this lean, mean thinkin’ machine what it is today. In those years, we had some successes and some failures, and if you meatballs can’t fly right, you’ll wind up piloting one of these.(photo of chicken) Do I make myself clear?”

Unfortunately a new recruit, Buzzy, came in late.  And even more unfortunate is that HQ assigned Buzzy to pilot “the most unstable craft in the fleet”—an adolescent boy.  With the pre-show over, you now move into the main theater where the fun continues.

The main theater was designed to put you inside the head of a 12-year-old boy.  Audio-Animatronic Buzzy was in charge of coordinating all the bodily functions like brain, stomach, heart, etc.  Eye-shaped screens allowed you to see what the 12-year-old sees.  Celebrity actors playing left brain, right brain, stomach, etc. appeared in other screens above and below the eye screens. 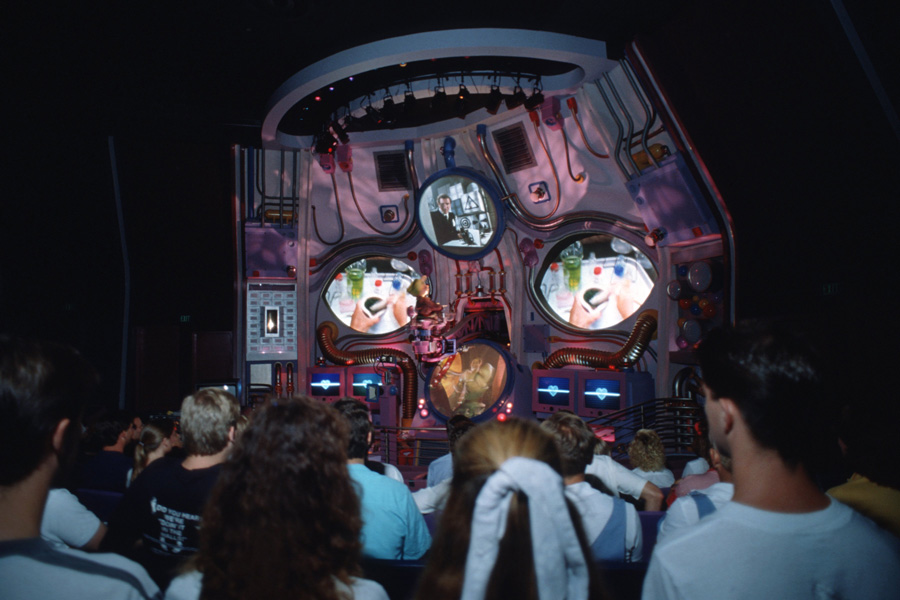 I loved, loved, loved Cranium Command! It had it all — a great script, casting of familiar voices, terrific animation, a clever theater space, and a skillful combination of Audio-Animatronics with film.  The voices of the animated characters were popular stars of 1980’s television like Charles Grodin (left brain), Jon Lovitz (right brain), Dana Carvey (right ventricle of heart), George Wendt (stomach), ‘Bobcat’ Goldthwait (adrenal gland), and many others.

See the full Cranium Command pre-show and main show below.  I’ll bet you learn something you didn’t know about humans and I KNOW you’ll laugh!  Enjoy!