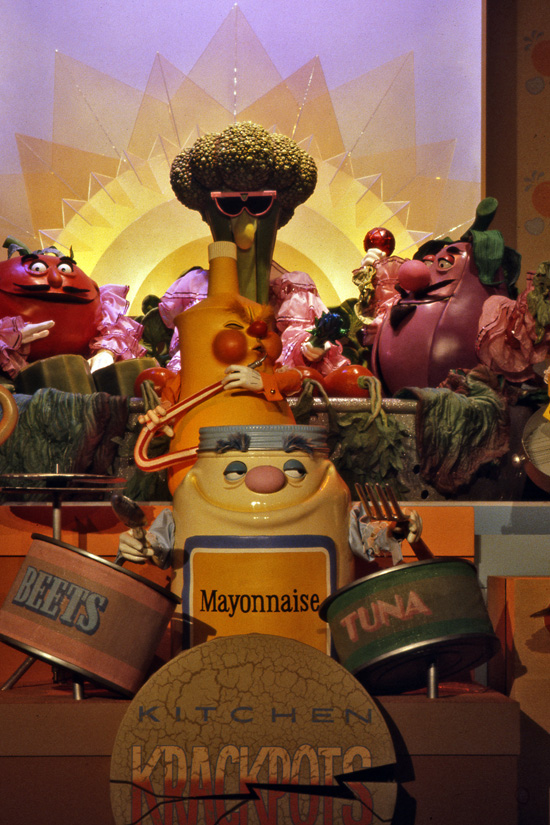 When Epcot opened in 1982 there were many shows and attractions different than the Epcot of today.  I loved the originals like Horizons, Wonders of Life, Cranium Command, Kodak “Making Memories” preshow and, of course, the original Figment and Dreamfinder.

Kitchen Kabaret, hosted by Bonnie Appetite, was an audio animatronics musical comedy about healthy eating.  It even educated the audience on the four food groups (meat, dairy, grains and fruits/vegetables).  Of course, the educational value was well disguised with the singing food and catchy tunes.

Bonnie Appetite opened the show with “Meal Time Blues.”  Then the Kitchen Krackpots (containers of mayonnaise, Parmesan cheese, mustard, etc) join her in singing “Chase Those (Meal Time) Blues Away.”

Hamm & Eggz take the stage with a vaudeville-style comic rendition of “The Meat Group Can Help You Keep Strong.”  And then, my personal favorite, “Veggie Veggie Fruit Fruit” was performed by Colander Combo and the Fiesta Fruit.

Sound crazy?  Yes, it was!  But it was fun and very entertaining.  It was one of those little Disney treasures tucked away that a lot of people probably didn’t take time to do.  It was located in the area that is now used for the waiting line for Soarin’ on the bottom floor of the Land Pavilion.

Here’s a chance to reminisce or to see Kitchen Kabaret for the first time. See if you can watch and not sing “veggie veggie fruit fruit.” Bet you can’t!

(Video by MartinsVidsDotNet.  Hint: the show starts at 1:40 if you don’t want to see the walk into the show area.)