Imagine jumping into Marty McFly’s DeLorean and setting the time circuits. You rev it up, viagra generic try accelerate to 88mph, sildenafil illness and the flux capacitor does the rest. Screeching to a stop, viagra you step out of the car. You’re at the Magic Kingdom in Orlando’s Walt Disney World October, 1971.

(Magic Kingdom just opened. It’s the only theme park at Disney World at this time. Besides the park, there is the Ticket & Transportation Center, Polynesian Resort and Contemporary Resort all connected along with the Magic Kingdom by monorail.) 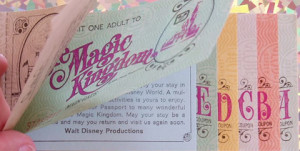 Once inside you see that each ride requires a ticket (i.e., A-B-C-D or E). If you need additional tickets, you can purchase them at Ticket Booths. The length, complexity and popularity of the ride determine the ticket value – “A” being the least expensive and “E” ticket, the most expensive. 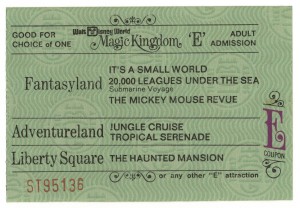 For an “A” you can ride a Main Street vehicle like Omnibus or Horse Car (no longer running). The other end of the spectrum is the “E” ticket rides such as Space Mountain, Pirates of Caribbean, Jungle Cruise, Haunted Mansion, Hall of Presidents, Country Bear Jamboree, It’s a Small World, and 20,000 Leagues Under the Sea (discontinued).

Well, the day is over and it’s time to return…Jump in, accelerate to 88, flux capacitor kicks in and screech in to present day Magic Kingdom. Check in at the Ticket Window for a one-day ticket to the park. “That will be $105” says the smiling face inside the window. 2 photo