Walt Talks About Carousel of Progress

Disney’s Carousel of Progress is still rotating at Walt Disney World’s Tomorrowland after 40+ years.  There are very few attractions left that Walt Disney had a personal hand in developing – that’s one of the reasons it’s a very special attraction.  Walt talks about Carousel of Progress in this video made prior to its debut at the 1964 New York World’s Fair.  It was a smash hit!

After the Fair, the attraction spent the next several years in Tomorrowland at Disneyland.  Then in January 1975, its new home became Tomorrowland at Walt Disney World in Orlando.

The Carousel is divided into four stages/scenes depicting an American family in their home and how times have changed from 1900 through today.  The seated audience is rotated around four stages to see the audio-animatronic family interact in different scenes (time periods). 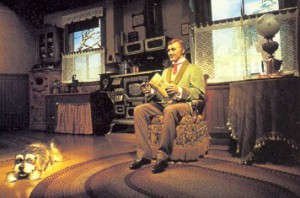 Host John and Rover in Carousel of Progress

I’ve been enjoying the attraction for years.  To keep it up to date, every few years they change the last scene to the “latest” technology.  When it first came to Disney World, Scene 4 was based on the latest 1970’s technology.  Of course, the present version was changed to showcase our present day technology.

For those of you who have visited the attraction several times, you may notice the main character, John, and his dog Rover have changed from the original version that is featured in the video.  The photo on the right shows what they look like today.

Hope you enjoy watching Uncle Walt share his excitement as he takes us on a tour of the making of Carousel of Progress (from Disney Parks).